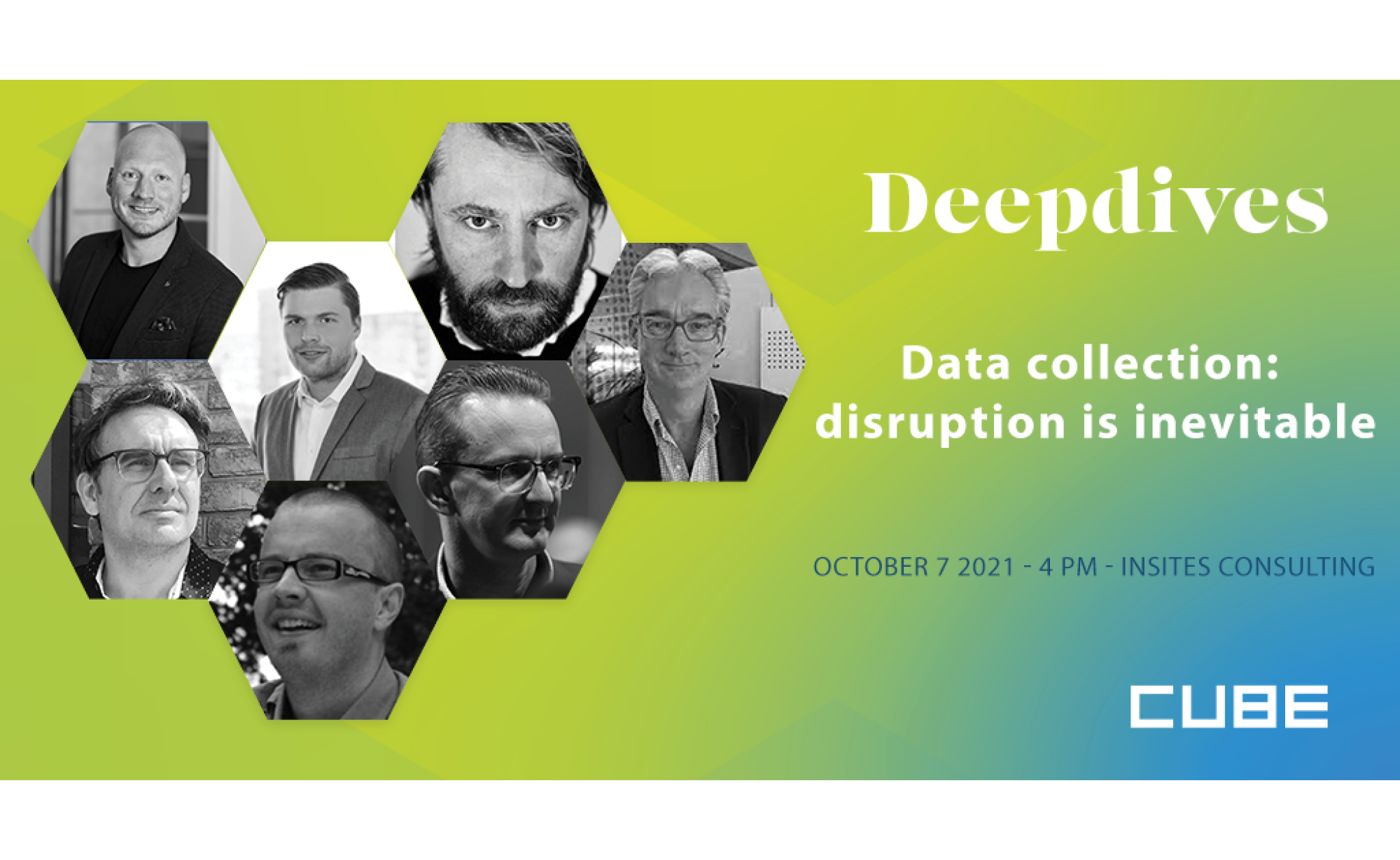 Posted at 13:58h in Consumer Understanding by Sarah Vyverman

The craft of consumer research is going through a huge wave of disruption. What challenges does it face? What is the role of technology now? And what new insights can we bring to the surface today? At CUBE’s latest Deep Dive, six specialists came to talk about this.

The first speaker of the group, Wilko Rozema of Dynata, immediately set the tone. The good news is that the demand for online survey data has been growing steadily in recent years, but at the same time, the industry must adapt to a new reality. There is an enormous competition for respondents’ time and willingness, and the collection of answers is increasingly taking place via technological detours.

Finn Raben of Esomar had brought along a few concrete figures to prove this. He estimated the total market for consumer research worldwide at around 90 billion dollars. Data and analytics methods account for a market share of 47.7 percent and have, in about ten years time, thus overtaken traditional market research (42.5 percent). It is not difficult to guess the reason. One minute on the Internet is good for 500 hours of YouTube videos, 69 million Whatsapp and Instagram messages, 198 million e-mails and 10,000 LinkedIn connections. So there is a gigantic amount of data available from which to filter the preferences, attitudes and likings of consumers.

Not that this does not come with its own challenges, says Rozema. Consumers are less and less willing to share things. For example, the number of respondents in consumer research who refuse to even reveal their age is huge. Rozema also thinks that the research agencies themselves have a lot of catching up to do. The experience that people have with surveys still leaves a lot to be desired. Too many surveys are far too long or, for example, not optimized for mobile devices. Addressing this would already help to see the “samples” more as a value, something that many companies have lost sight of recently, according to Rozema.

Olivier Tjon of Beyond Reason points to the ever-increasing importance of “implicit marketing”. Here, new neurological insights about how our brain works are applied to marketing and market research. Recent research shows that our buying behaviour, for example, is almost entirely driven by our subconscious brain. People don’t really know why they do what they do. So is there any point in questioning them about it, Tjon wonders. “You can ask people what their favourite beer is or when they prefer to drink it, but as soon as you start asking why, you get useless answers. You need implicit tools for that.” At the same time, of course, this also has an impact on the broadcast model that companies use to influence decisions. These kind of messages should be put much more on an “unconscious level”, says Tjon.

Wim Hamaekers of One Inch Whale came to reinforce Tjons arguments. In his presentation he talked about the unmistakable (and often underestimated) power of colors. Colors, said Hamaekers, are much more than a purely personal preference, but have an undeniable impact on our subconscious brain. They influence emotions and bring along all kinds of associations. And these are things that marketers can definitely use to their advantage. After all, Hamaekers argues, you can far easier tap into the subconscious brain through colors and shapes rather than through words or numbers. In 85 percent of all purchase decisions, color is the most important element. Out of ten snap judgements about brands, six to nine are purely based on color. And research shows that color is by far the best remembered visual component of a brand. Shapes, too, make a contribution: angular shapes stand for professionalism, discipline and strength. Round shapes represent love, comfort and inclusion.

Green is balance, peace and quiet

Hamaekers also brought along some examples to make his point. For instance, it is absolutely no coincidence that blue and orange are the dominant colors of online retailer Coolblue. Recently, the brand added a shade of green. That green is mainly in the “buy” button on the website and in the review section that people can leave behind. “Green is a color that stands for balance, peace and tranquility,” says Hamaekers. “In this way Coolblue takes away, so to speak, some of the pain involved in spending money.”

One Inch Whale also recently worked of the labels on bottles for a wine manufacturer. Two variants were made of these labels, with the colors (red, green, …) differing only by a few shades. However, this small variation immediately caused an enormous shift in perception about quality, taste and price. The bright shades were considered by respondents to be of lower quality, flatter in taste and cheaper in price. The darker labels were seen as more expensive, with a more complex flavor and of a higher quality.

Finally, Antoon Van der Steichel of Ipsos talked about ‘passive measurements’ in his presentation: how can you gain insight into consumer behavior, not by asking traditional questions, but by monitoring consumers in real time? According to Van der Steichel, new, inventive ways of research are needed because consumer behavior has changed so much that the old methods no longer work. He refers to his own profession: measuring the reach of TV, radio and newspapers. Twenty-five years ago, each media type had its own platform and everything was easy to measure. Nowadays, the use of media is so fragmented that these measurement methods no longer work.

Ipsos therefore developed a few alternatives. The Mediacell app is one of them. This is an app that uses the built-in microphone in smartphones to find out which radio and TV stations a consumer listens to and watches. The BBC is already using it in the UK. The new method also makes interesting new analyses possible. For example, it is very easy to simultaneously track both the live audience of a particular TV show and the interactions on social media to find correlations.

A second Ipsos innovation is the Mobitest. This is a device that respondents carry with them at all times and which uses GPS and accelerometers to measure where they are and where they are going. In this way, it is possible to check which billboards they came into contact with. Convincing people to give up some of their privacy for this was not that difficult, says Van der Steichel. These are usually respondents who have worked with Ipsos before and therefore know that they can trust the company with their data. Moreover, all data is anonymized and cannot be traced back to individual persons.

Nevertheless, human intervention remains necessary. For example, if a Mobitest does not show any movement, a human agent must check with the respondent whether he is really at home or whether he has simply forgotten to take his device with him. “On top of that, we also want qualitative background,” says Van der Steichel. “We know which route someone took, but why he or she took it, we still have to ask explicitly.”

We use cookies on our website to give you the most relevant experience by remembering your preferences and repeating your visits. By clicking "Accept all", you agree to the use of ALL cookies.
Accept allCookie settings
Manage consent

This website uses cookies to improve your experience while you navigate through the website. Out of these, the cookies that are categorized as necessary are stored on your browser as they are essential for the working of basic functionalities of the website. We also use third-party cookies that help us analyze and understand how you use this website. These cookies will be stored in your browser only with your consent. You also have the option to opt-out of these cookies. But opting out of some of these cookies may affect your browsing experience.
Necessary Always Enabled

Performance cookies are used to understand and analyze the key performance indexes of the website which helps in delivering a better user experience for the visitors.

Analytical cookies are used to understand how visitors interact with the website. These cookies help provide information on metrics the number of visitors, bounce rate, traffic source, etc.

Advertisement cookies are used to provide visitors with relevant ads and marketing campaigns. These cookies track visitors across websites and collect information to provide customized ads.

Other uncategorized cookies are those that are being analyzed and have not been classified into a category as yet.